What Are Primitive Reflexes?

Most of us are familiar with and have experienced a simple reflex – touch something hot or sharp with your finger: what happens? – you very quickly pull your hand away from the heat or pain, without thinking about it! This is a reflex action. It is an involuntary reaction in response to a stimulus. This simple reflex action is controlled by areas of the spinal cord. It can occur at all times throughout our life.

Primitive reflexes are reflex actions originating in the central nervous system that are exhibited by normal infants, but not neurologically intact adults, in response to particular stimuli. These reflexes disappear or are inhibited by the frontal lobes as a child moves through normal child development.[1] These primitive reflexes are also called infantile, infant or newborn reflexes.

Older children and adults with atypical neurology (e.g., people with cerebral palsy) may retain these reflexes and primitive reflexes may reappear in adults. Reappearance may be attributed to certain neurological conditions including, but not limited to, dementia (especially in a rare set of diseases called frontotemporal degenerations), traumatic lesions, and strokes.[2][3] An individual with cerebral palsy and typical intelligence can learn to suppress these reflexes, but the reflex might resurface under certain conditions (i.e., during extreme startle reaction). Reflexes may also be limited to those areas affected by the atypical neurology, (i.e., individuals with cerebral palsy that only affects their legs retaining the Babinski reflex but having normal speech); for those individuals with hemiplegia, the reflex may be seen in the foot on the affected side only.

Primitive reflexes are primarily tested with suspected brain injury for the purpose of assessing frontal lobe functioning. If they are not being suppressed properly they are called frontal release signs. Atypical primitive reflexes are also being researched as potential early warning signs of autistic spectrum disorders.[4]

Reflexes vary in utility. Some reflexes hold a survival value, (i.e., the rooting reflex, which helps a breastfed infant find the mother’s nipple). Babies display the rooting reflex only when they are hungry and touched by another person, not when they touch themselves. There are a few reflexes that likely assisted in the survival of babies during human evolutionary past (i.e., the Moro reflex). Other reflexes such as sucking and grabbing help establish gratifying interaction between parents and infants. They can encourage a parent to respond with love and affection, and to feed their child more competently. In addition, it helps parents to comfort their infant while allowing the baby to control distress and the amount of stimulation they receive.[5]

Important types of developmental reflexes are:

This reflex begins to function very early after conception and should normally be integrated before birth. It can be seen in utero as movements of the head, neck and body in response to a threat. It is sometimes classified as a Withdrawal reflex rather than a primitive reflex.

Retention of this reflex presents as:

The moro reflex begins to function 9-12 weeks after conception and is normally fully developed at birth. It is the baby’s alarm reflex. The newborn’s higher centres are not sufficiently developed to make a rational decision whether a circumstance is threatened or not. The reflex is elicited by excessive information in any of the baby’s senses, a loud noise, bright light, sudden rough touch etc. turns on the reflex and because this reflex is a “one reflex for all occasions” the fight and flight hormonal and neurological response turns on, preparing the body for whatever turned on its alarm system.

Together with the Rooting reflex explained below this aids in the neonate to breast feed without any problems. If this reflex is not adequately integrated, the tongue projects forwards before moving backward in the normal swallow. Thus pushing the front teeth forward, altering the shape of the upper jaw causing a “overbite” and hence dental problems can develop later on.

Light stroking of the cheek or stimulus of the edge of the mouth causes a baby to turn its head towards the stimulus, and open its mouth with extended tongue in preparation for suckling.

The palmomental reflex is a reflex contraction of the eye in response to stimulus of the hand. This is also known as the “Babkin response”. This reflex emerges at 9 weeks in utero and is normally integrated by 3 months of age.

A noticeable change when this reflex has integrated is freedom of speech, hand articulation and facial mobility.

The Plantomental reflex is related to the stepping reflex and aids in crawling and the feet.

Together with the plantar reflex this reflex develops in utero. The common evidence of this reflex being present is “grasping“. In early stages of neonatal development this reflex is also related to feeding (Babkin response). This reflex is elicited by suckling and kneading in time with the suckling response.

Retention symptoms past 3 months of age include:

The Plantar reflex like the Palmer is used for grasp and emerges in utero and is normal to be fully present at birth. It is normally integrated by 6 months of age. At this age crawling and general movement of the infant is beginning and it appears that this reflex may have connection with many of the gross motor function of an infant.

If the plantar reflex is retained:

This reflex begins about 18 weeks after conception and should be present at birth. This reflex appears to assist the babies movement and participation in the birthing process.

After birth the reflex continues and plays an important part in the development of hand eye coordination, object and distance perception. By the middle of the first year of life this is normally accomplished and the ATNR, being no longer required, should be integrated.

In early months, after hand-eye co-ordination is established, the ATNR locks vision on to anything which catches the attention. If the ATNR is retained beyond 6 months of age the following can be possible;

The TLR begins about 12 weeks after conception. It involves the balance and position in space and is present at birth when the neck bends forward, backwards or tilts to one side. When this occurs with this reflex present the arms bend or extend depending on the position of the head. Each part of this reflex integrates at different times of the babies development and should be completed by the age of 3 years.

Retention of this reflex may cause

Commonly found in adults. Correction of this reflex is important for those receiving Sound Therapy. It reduces the occurrence of adverse reaction to sound therapy and may assist in its effectiveness. Lateral neck flexion is often greater immediately after correction. The patient may be a little disoriented for a short while after correction and it may take a few minutes to adjust.

The SLR is known to assist concentration and poor posture whilst sitting. This reflex is generally related to the TLR and STNR reflexes and is important in integration of these reflexes.

Tiredness at the end of the school day, poor concentration or retention of information in class is often associated with this reflex failing to integrate. This reflex is demonstrated when the child prefers to push their chair out too far, lean onto the desk, and props their head up on their hand to ensure their head is in line with their torso. Alternatively they may slump or prefer to do their homework lying on their stomach.

The Spinal Galant Reflex begins about 18 weeks after conception and is normally integrated before the end of the first year of life. It appears to take an active role in the birth process, causing small movements of the hip on one side, similar to the head and shoulder movements of the ATNR. 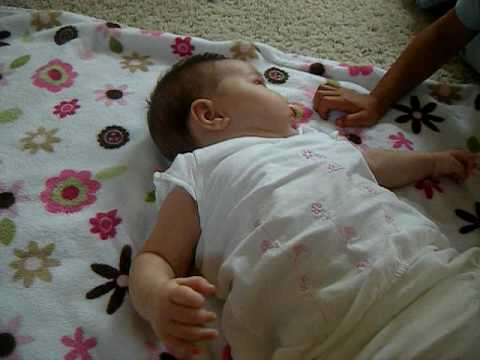 The STNR is not present before or at birth and begins initially with bending of the spine at 6-9 months of life and then at 9-11 months in spinal extension. It should be integrated at 12 months of age and aids in the child’s ability to place itself in a position ready for locomotion.

Without the STNR integrating problems may include;

Retention of this reflex affects gross motor skills. Children are more injury prone, clumsy, and may find it difficult to coordinate their upper and lower body together. Exercise may not be enjoyed but once corrected, we commonly see an eagerness to exercise and an improved performance running and swimming.

Primitive reflexes are hard wired into our system and remain active our whole life. During our first year of life, as our nervous system matures we begin to think using our higher mind. Thinking allows us options to move a different way to the autonomic responses hardwired in our nervous system. In order for our new intentions to be carried out unimpeded, the cortex must have developed adequately to inhibit, or override, the active primitive reflex. If maturation of the cortex is hindered in any way, its suppressive function can fail to prevent the expression of the primitive programmed response to the stimulant. Symptomatic disruptions to learning and development occur when a person’s intended actions are constantly interrupted by a more primitive programmed action.

Primitive reflexes are stimulus-elicited, automatic, without cortical involvement. If their neonatal display is not integrated into higher function, the child has little or no control over their elicitation. There is little use trying to force extra teaching or behaviour modification upon a system in which the basic intrinsic modules for learning and behaviour are not correctly functioning.

How do we (BESTCentre) help our children with these reflexes?

The process involve light muscle testing and gentle pressure on particular points and various rhythmic movements to allow each reflex to integrate. These techniques are called Rhythmic Movement Training (RMT), and at BESTCentre, our experienced practitioners guides our children with specific sequence of movements which follows the developmental pathways that have been inhibited. As our children spend adequate time with us at the centre, we are able to work on them at specific intervals and allow the reflexes to properly integrate over time. Some of the reflexes integrate within weeks, whereas others take longer.

Why are Neonatal Reflexes retained in some babies and not others?

As previously mentioned reflexes are usually inhibited by the normal movements a baby makes in the early stages of development. If the baby does not make these normal movements, the neonatal reflexes will remain active and the postural reflexes may not develop normally and hence other aspects of neuro-development that is important for learning will therefore be delayed.

Part of text extracts from Norwest Wellness and Wikipedia.